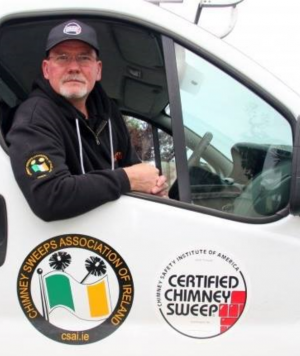 To address the 6000+ chimney fires being attended to every year by the Irish Fire Service (60-65% of all domestic fires attended to by the Irish Fire Service are Chimney Fires).
Educate the public on Health & Safety issues in relation to using their multi-fuel appliances. Train hundreds of chimney Inspectors to address all of the above. Work with Household Insurance companies in preventing unnecessary chimney fires and the claims associated with same.

Many customers over the years have asked me why I became a chimney sweep?

My family and I moved from Dublin to Wicklow Town circa 1988. I was working as a superintendent for a Tennis Club in Dublin at the time. One day my wife Bernie advised that we had to get our chimney cleaned but didn’t know who to get. I advised Bernie to look in the local Golden Pages book. A few days later a man and his son from a local cleaning company arrived to sweep our chimney. I was on my way out the door when I stopped and looked at the man who was kneeling in front of the fireplace preparing to sweep our chimney. I noticed his son had a vacuum cleaner in his hand. The man asked; “can I help you”? I replied, “I’ve never seen this done before and was wondering how you did it”. The man replied, “I don’t like people watching me work”. I couldn’t believe what he just said and advised him to get on with it. The man started pushing a large sweeping brush up the chimney. The soot immediately started coming out into the room and into the air. The man’s son then turned on their small vacuum cleaner and tried to remove the soot that was in the air. I started yelling and advised the man the soot was landing on my wife’s pink settee. The man then said, “well it’s a dirty job and you have to make a little mess”. I told the man and his son to stop and get out. After they left, I went to find my wife to tell her the bad news. My wife came running in the door breathless. I asked her where were you? She replied, “I went running after them to pay them and added, I also gave them a fiver tip”. We tried for hours trying to remove the soot from the carpet and settee but to no avail.

I started thinking of ways to sweep my chimney without making a mess. I eventually came up with a system that worked.

After leaving the Tennis club my wife and I started our own cleaning company. The signage on the van advised our company also swept chimneys and guaranteed no mess. I could not believe how many customers told me of their bad experiences with other chimney sweeps i.e., like the experience we unfortunately had, or other chimney sweeps going up the flue only a couple of rods because they were afraid of making a mess or fearful of knocking off the customer’s chimney cowl. Other chimney sweeps would block the fireplace opening at the bottom and sweep the chimney from the roof. Unfortunately, pushing the chimney brush down the wrong chimney pot would destroy the neighbour’s living room with soot. I also found a lot of scams were being used when dealing with the elderly. One scam involved sweeping the chimney, bringing in a dead bird (which they found that day) placing it on top of the soot and advising the elderly householder that they found a dead bird and would supply & fit a €10 bird guard for €150. Another scam involved two chimney sweeps. One chimney sweep would ask the elderly lady to come outside and look at the brush that was out the top of the chimney to make sure it was done right. The other chimney sweep that was alone inside the house would then take money from her purse or anything else of value. It was because of this I founded the Chimney Sweeps Association of Ireland. There was no training facility here in Ireland. I contacted a chimney sweep association in the UK. And was advised there was an instructor but when I contacted this instructor for training, he suggested that I come over and hand him £300 in cash in a brown envelope. I decided against going to the UK. I contacted my colleagues in Northern Ireland. Their chairman invited me to Belfast to train with him and attend their AGM. I was asked at their AGM if I did weddings? I told them I wasn’t a priest. They laughed and advised me of the custom where it is extremely lucky for a bride to be kissed on the cheek by a chimney sweep on her wedding day. I found it was practiced here in Ireland in the 1940’s and 50’s but died out when the chimney sweeps themselves passed on.

Everything happens for a reason!

Being a chimney sweep not only involves sweeping a chimney without making a mess it also involves many other things including a visual inspection of the chimney, fireplace surround, fire back, air vent, carbon monoxide alarm, installation of multifuel appliance and ensuring your customers are burning the correct fuels.

I found when the Irish government introduced bin charges a lot of my customers started burning household waste in their fireplaces i.e., babies’ nappies. I found one elderly lady was using 2 litre plastic bottles as firelighters. I advised the lady that her fireplace was not an industrial incinerator and the heat generated by her open fire would not be hot enough to address the plastic bottle chemicals. I added that burning plastic was not only bad for the environment, but these fumes are carcinogenic and if there was a downdraught this waste material could potentially spill back into the living room. The lady told me she had no idea, she told me her young grandsons often play video games in front of the fireplace. She told me that I should tell more people because a lot of people just don’t know. I contacted the Environmental Protection Agency and advised them of my findings. The EPA wanted to know who was burning waste in their fireplaces? I advised the EPA that almost everybody was doing it, but I would not be providing any names. The EPA asked me to take part in an ECO EYE program with Duncan Stewart. I was very nervous about appearing on TV and contacted the Chimney Safety Institute of America for advice. The CSIA receptionist advised me that burning household waste in your chimney multiplies the chances of ignition i.e., chimney fires. I was also advised that damp/wet wood should never be used and only seasoned wood with a moisture content of 20% should be burned. I did the program with Duncan Stewart in a customer’s house in Roundwood, Co. Wicklow.

After we finished the ECO EYE program, I told my wife that I was so impressed with the Chimney Safety Institute of America’s advice that I applied for their next course. It turns out I was the 1st E.U. chimney sweep to attend the National Chimney Sweep Training School in Plainfield Indiana and successfully pass the CSIA Certified Chimney Sweep Exam. (photo of Certificate). 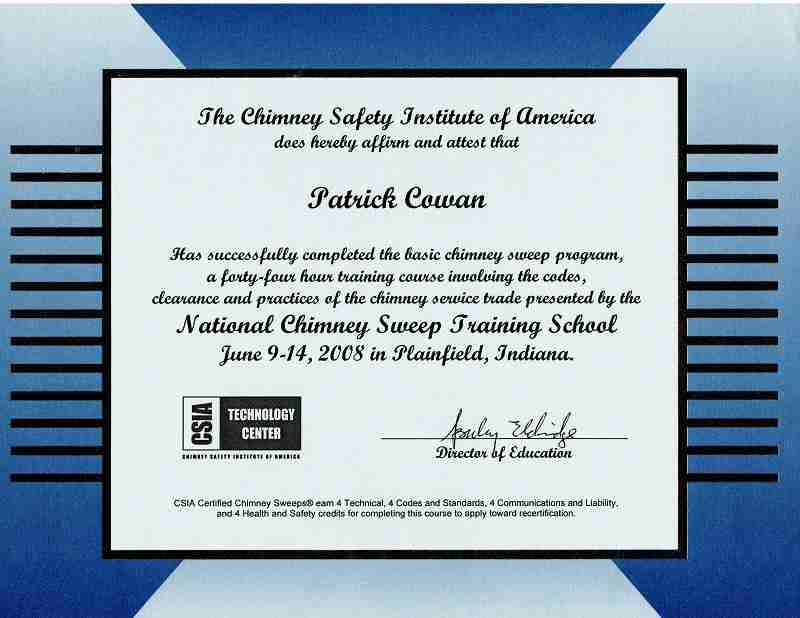 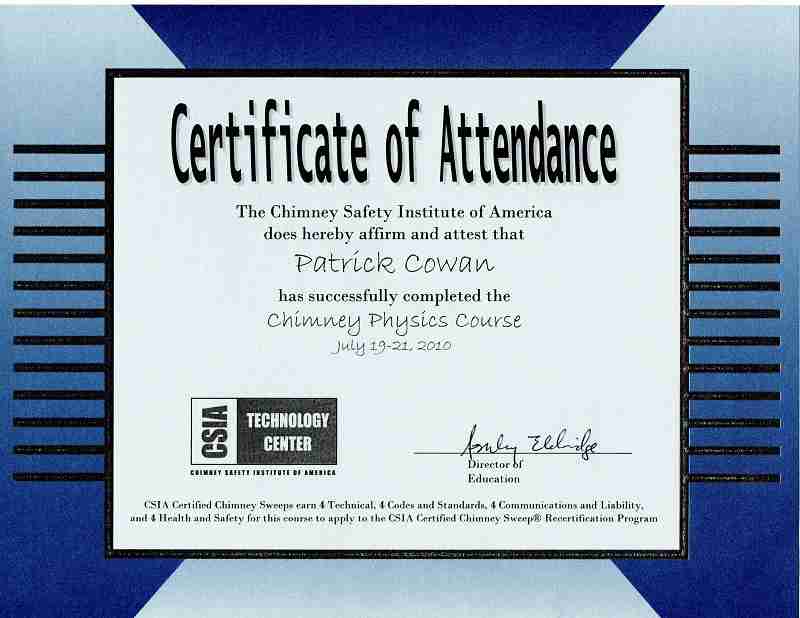 I also attended three chimney conventions in the United States of America 2009, 2010 & 2011 respectively. I was invited to provide a powerpoint presentation on the increasing number of chimney fires attended to by the Irish Fire Service in Ireland and the reasons for same.

I contacted the directors of the Chimney Safety Institute of America and signed a three year contract to open a chimney sweep school here and train sweeps to become Chimney Sweeps Association of Ireland certified.

I also contacted FAS (Foras Aiseanna Saothair) Training and Employment Authority and put forward a business plan to train 400 chimney sweeps. FAS came back several times having isues with Health & Safety. I advised FAS that all Health & Safety issues were covered on the course.

FAS suggested that as I was not a qualified trainer that I should complete a FETAC Train the Trainer program which cost me €800. I passed the exam and received a distinction. 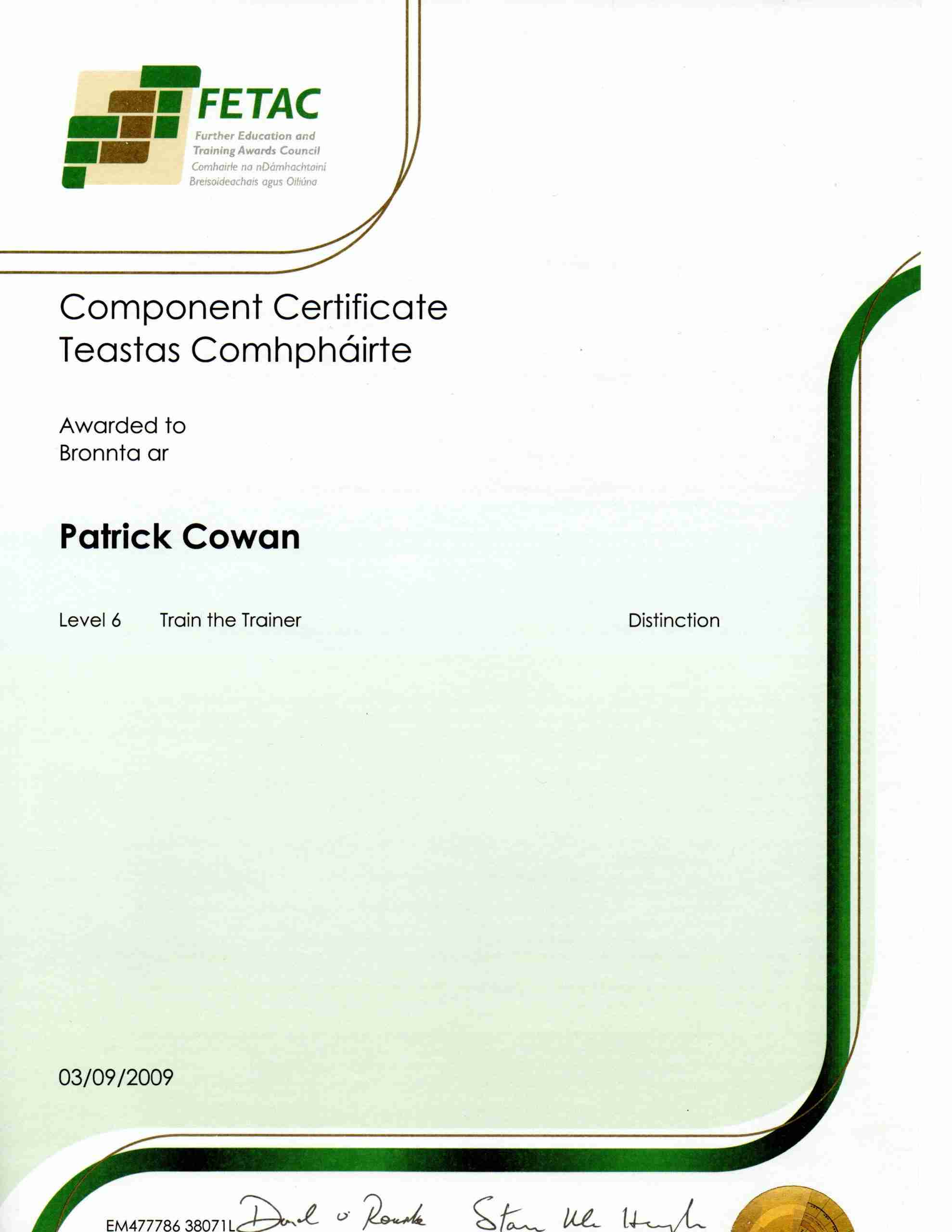 FAS finally (after two full years) approved my course and I began with a small pilot scheme. I trained a class of 5 men who all qualified for FAS approved funding. Everything was finally starting to come together when FAS was suddenly disolved in 2011 due to financial irregularities. I contacted the new state agency SOLAS and was advised that I would have to start all over again.

The downturn in the economy arrived leaving my two bricklaying sons out of work. As I was already sweeping and inspecting chimneys I, together with my sons moved into chimney relining.

March 2020, I was going to reopen the National Chimney Sweep Training School of Ireland and start training chimney sweeps again but due to the Pandemic eveything stopped. Unfortunately the scammers and so called certified chimney sweeps are growing in numbers and coming up with different ways and means of taking your money. Last December 2020, a lady from Monkstown, Co. Dublin contacted me and advised a certified chimney sweep (whom she found on Google) came and charged her €180 to sweep two solid fuel open fires. The lady added the chimney sweep told me he lost his brush up the chimney and not to use my fires until he came back. He added that he couldn’t come back until the new year as he was too busy he also told me that he would reline my chimneys and fit two stoves. The chimney sweep also did not have any lettering on his van and he also emptied all his bags of soot into the lady’s skip bag which was in her front garden. I told the lady that I was very busy but would find the time to CCTV chimney survey both flues and remove the chimney sweep’s brush. I CCTV surveyed both flues and found the so called certified chimney sweep did not sweep either flue. I also found the chimney sweep did not loose a chimney brush up the flue. I advised the lady of what I found and advised her that this was a scam and to contact An Garda Siochana. I was asked last year to join the Federation of British Chimney Sweeps but declined as I’m Irish not British. Speaking of which this is the new logo for the Chimney Sweeps Association of Ireland.

Leave an email to
cowanchimneysolutions@gmail.com

Leave a message to request a call back